AN OLD newsletter first printed 40 years ago during the construction of Staffin Hall – the Co-Chomunn – has provided a timely snapshot of the community’s efforts into delivering the ambitious project.

‘Mac-Talla’ was printed just before Christmas in 1982 to update Staffin residents about progress of the district’s new village hall, which included a shop, restaurant, crafts outlet and toilets. It was a pivotal moment in the Co-Chomunn’s history, as Staffin led the way in Skye in coming together to form a community co-operative. The newsletter highlighted how the weather had affected the construction, Staffin’s appearance in a BBC TV show, sales of livestock feed, the football club’s search for a permanent home, youth club challenges and staff opportunities.

The newsletter reported that Staffin had raised more local funds than any other community in the scheme which was administered by the predecessor to the Highlands and Islands Enterprise – the HIDB (Highlands and Islands Development Board). John Watt of HIDB stated: “Staffin is at the centre of a new and growing sector of the Highlands and Islands’ economy – one which is beginning to show that small communities can take initiatives into their own hands and work together to provide employment opportunities and better standards of living for their people.” 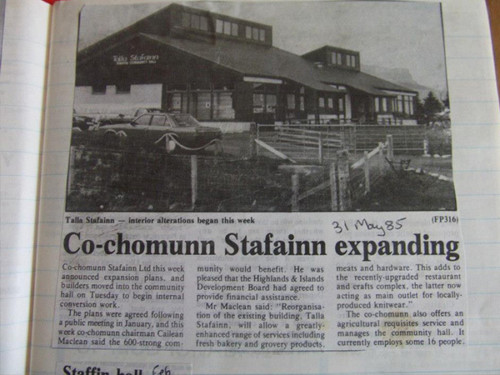 The architect wrote that the Staffin folk would have had “very up to date knowledge” of the building’s progress as they passed the site each day. The architect, who is unnamed, wrote: “The roofing and cladding operation has unfortunately been having very bad luck so far with the weather; at one stage, only able to work four days out of sixteen. However, with this critical stage over, the local contractors should now able to make good time on the job with shelter from most of the weather.”

There was a story about the efforts of the local community in reducing the cost of the hall project by getting water supplied to the building site. The water board had quoted a high cost for this but quick thinking from the Staffin fire unit saw that for a “little effort the job could be done for next to nothing.” Permission was subsequently given by the fire brigade to pump water from the Kilmartin River up to the site using their equipment and “several individuals braved long, cold and wet evenings supervising operations.”

The newsletter also featured details of Staffin FC’s pitch struggles and described them as the “nomads” of Skye football on account of having no home parks. Home games had been played on the old blaize pitch in Portree but in the past two years travel costs were reduced by getting permission to play in Uig. However, a site was earmarked at the Digg township's common grazing and provisional work was carried out in the summer of 1982. That pitch sadly never materialised and it wasn’t until the end of the decade when the new Staffin Primary School opened in 1989 that the community secured a grass football pitch, albeit a tight park for 11-a-side matches.

Ciorstaidh Ann Ross, Ellishadder, was one of the key local people driving the Co-Chomunn project and the fundraising efforts. Ciorstaidh Ann, who now lives in Tighean na Glebe, said in her Co-ordinator’s Report that she hoped 1983 would not be very old before the building was open for business. “Knitwear from Staffin sold well during the summer and continues to be bought at a satisfactory pace,” she wrote. “We are on a constant lookout for knitters willing to join us. Although a bit late in starting, the sales of hay, (under the agricultural supplies project) did well, a useful service was provided for the community in bringing in this hay and while cheaper than could be got elsewhere northerlies provided the Co-Chomunn with a small profit.

“Much more could be done had we a permanent manager. I have assumed the role of co-ordinator on a temporary basis until such time as a manager is appointed., We hope to see the manager in place at the beginning of March.”

A short report stated that Staffin Youth Club’s membership was at its lowest for some time with only 30 members, Funds were almost “non-existent” and the lack of facilities left “morale at a low ebb”.

“We look forward to a great improvement when the new hall is built – at least then the youth club will have better and more attractive premises, where we will be able to build up and safely store a range of new equipment”, the youth club concluded.

The ethos of the Co-Chomunn lives on in Staffin to this day. The hard-working Staffin Community Hall Association bought the shop from private ownership more than a decade ago and it is now run as a social enterprise for the benefit of the community.

It has been a remarkable success since 2006 and provides an excellent service locally, with public toilets, a book stall and as a source of local employment.