Skye’s Trotternish peninsula is full of archaeological remains to explore. People have been living here for more than 8000 years and have left their mark on the landscape.

We only know about the very earliest arrivals – Mesolithic hunter gatherers – from scatters of stone fragments in places where they made tools, and the remnants of their meals. At An Corran archaeologists excavated a shell midden, the remains of early peoples’ seafood supper. These people arrived on Skye almost 170 million years after the dinosaur footprints were left in the nearby rocks. 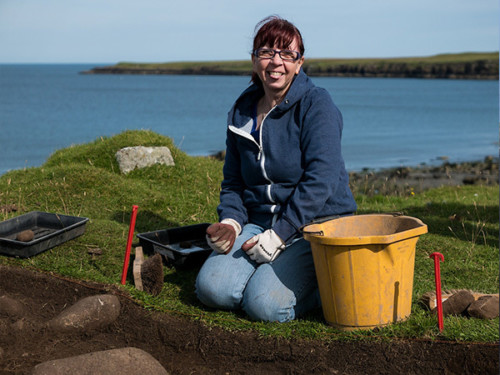 Some of the most interesting archaeological remains come from burial sites, where communities interred their dead. In Staffin you can see burial cairns from the Neolithic Period and Bronze Age, for example at Cadha Riach. Neolithic communities were the first to start farming here – growing crops and keeping livestock – the beginning of a relationship between people and the land which continues into the present day.

Over time, communities in Skye started building bigger and more impressive structures. In the later Bronze Age and Early Iron Age, people here built brochs and duns like Dùn Raisaburgh and Dùn Grianan– these were monumental circular towers with a double outer wall and inner staircase. Throughout this period, people created circular dwellings, unlike our modern rectangular buildings. The most common roundhouse dwellings are referred to as Hut Circles, and their remains can be seen across the landscape in Skye, for example at Loch Hascoand Lonfearn. These dwellings would have been home to most of the population throughout this period.

Towards the end of the Iron Age, a new belief system emerged in Skye. The early Celtic Church, with its roots in Ireland, grew in Scotland through the first centuries AD. This established Gaelic as the common language of the region and Latin as a written language. Monks began to write down important events and information, marking the start of the historic period. Archaeological remains are still important, as they can tell a more complete story of settlement and religious practice in this Early Medieval period – you can see early churches or monks’ cells at places like Kilmartin.

Around AD 800, a new group of people approached Staffin from the sea: Vikings. A hoard of Viking silver was discovered at Storr Rock, which was buried between AD 935-940. We also know Norse peoples came here because many places in the area still have names which derive from Old Norse, the language spoken by these Scandinavian groups. When you visit places like Marishader, you can think about the people who lived here during this time of upheaval and transition.

Many of the stone walls and ruins you see across the landscape are fairly recent: they are the remains of townships, depopulated and abandoned over the last 200 years. The stone-built remains of homes at Garafad were left by the people who lived and farmed in this area when, in the 18th century, landlords increased rents far beyond what people could pay. In the two centuries following the economic decline of the 1760s, around 2000 people left their homes here when they faced eviction or, following the Potato Famine in the 19th century, even starvation. People forged new lives, often under tough conditions, in different parts of the island or in British colonies as far away as Canada and Australia. These communities were replaced with sheep farms, which could make more money for landowners than the original tenant farmers’ rents. The remains of buildings at Valtos, Sartle and Rigg all attest to the large communities who used to live here and work the land.

Some of the industrial sites you see, like the Diatomite Works, might seem out of place in the idyllic landscape of Skye, surrounded by the natural beauty of the waterfalls and rural sights of livestock. But these sites attest to the important role Staffin played in the industrial period, and how this area adapted to modern needs and industries.

The crofts, shops, museums and homes you see across Staffin are part of its story – evidence of people living and working in this landscape. This is a place imbued with history and memory, and however long you stay to explore its sites, you are also a part of its story.

If you're interested in reading more about all the archaeology and heritage sites that Staffin ecomuseum has to explore, here is a report on the area's archaeology, containing a comprehensive list of all the known sites here: Staffin archaeology report