The Staffin Harbour project will be the biggest infrastructure development in our community, and it is long overdue.

At present, there is no secure boat storage, a lack of shelter to protect vessels coming in and out of the pier, limited opportunities for berthing and no basic amenities such as a water, fuel or power supply. There were also major issues with the access road.

As the current facility is tidal there are constraints on the economic potential of the Staffin and north Skye community for fishing, aquaculture, marine tourism and recreation. The new harbour will provide a longer (deeper) and wider slipway, allowing boats to berth and launch at any state of the tide; making it much safer and practicable. The new breakwater will create shelter allowing boats to be moored on pontoons all year round.

This is an exciting community-led development which includes:

The increased activity that will be achieved through the different aspects of the harbour development will help our community's sustainability and ensure we have a healthy school roll in the future. Staffin’s population only increased by 1.8% between 2001 and 2019; compared with 9.2% in Skye & Lochalsh.

The new Staffin Harbour should be aiming to serve the needs of:

The development received a major boost in February 2020 when it was awarded a £969,000 grant from the Scottish Government's Regeneration Capital Grant Fund. In December 2021, the government's Fisheries Harbours Assistance awarded £900,000. This has helped fund the project's Enabling Works including a major upgrade of the access road https://skyeecomuseum.com/late... and will allow the delivery of electrical and water connections and new pontoons.

SCT is working very hard to secure the rest of the funding required in what is a challenging economic climate. Organic Sea Harvest has indicated it will pay a community benefit levy for landing fish at the Slipway. SCT propose to use that receipt as a contribution towards the development, estimated to cost more than £4million.

Our objective is to improve Staffin’s economic prospects, stimulate social and cultural activities and enhance services.

At the time of writing (April 2022) SCT had all three of the on-shore planing permissions required approved by Highland Council, and was awaiting the off-shore licence from Marne Scotland.

Our community has thrown their weight behind this project and a steering group made up of local residents and harbour users meets regularly to progress this long-awaited development. The Membership currently includes:

The group reports directly to the SCT board of directors

SCT is also supported by a range of stakeholders including:

History of the Staffin Slipway & Harbour

"One thing that would be an immense benefit to the whole of this parish, is the erection of a harbour and pier in Staffin Bay. I am informed that such could be made at no great expense. I am led to understand that Major Fraser has devoted a good deal of attention to this scheme some time ago, although it was never carried out. One great boon is that it would help to develop the fishing of the district, which is said to be second to none in the West Highlands.

"The steamers pass close to Staffin Bay four times a week, coming and going from Glasgow. These could then be taken advantage of, in conveying the fish to the market... the fishing would prove more remunerative than tending their crofts. Second, the carriage of goods at present is very expensive, so much so that it depreciates the value of the land in this district, through its inconvenience to the market. It is often the cause of great hardships, as meal and potatoes have to be carried, often on the back, 12, 13, and 14 miles."

Waged over large parts of the 1800s, the "war" was a dispute between landowners and communities distressed by high rents, their lack of rights to land, or facing eviction to make way for large-scale farming operations.

Rev James Davidson, Stenscholl, as told to The Napier Commission, which was a famous public inquiry into the tough conditions faced by crofters and cottars in the Highlands. It had erupted into open conflict with landowners here in Staffin but also in Braes and Glendale in the 1880s.

Known locally as “The Slip” - our harbour is regarded with great affection by the community’s residents, both past and present.

It was a lifeline for generations of local people with essential supplies being delivered by boat. It still is a key source of fish and seafood and the slipway area is also a recreational asset for Staffin’s community and visitors whether it is fishing off the rocks, camping, walking or bird watching.

The Congested Districts Board, which was subsequently set up by the UK Government to bring about major fishing and agriculture improvement to the crowded and poverty-stricken communities in the Highlands and Islands, built the original Slip in the early 1900s.

The stone slipway and a store was constructed by local men to allow freight to be delivered. Before its construction there was nowhere to store the cargo, from the boats, which delivered supplies between Glasgow and the islands.

In 2000, HRH The Princess Royal opened the extended Highland Council-owned slip and a new breakwater. The improved slipway and access road was Staffin Community's Trust’s flagship capital project at a cost of £350,000, with the final £10,000 required raised in only four weeks by the community. Funding had been secured from various sources including the European Union. 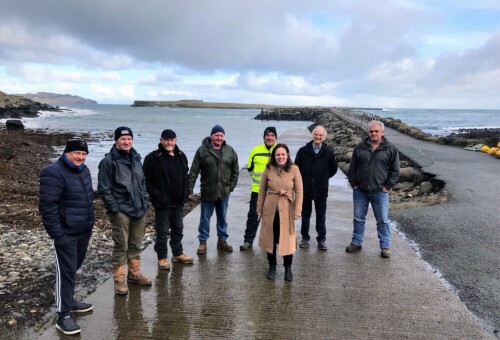