It was the first affordable housing development in Staffin for 23 years, and will see our community's present health clinic - the Nurse's Cottage - replaced by a modern facility and provide much needed business space.

It was the biggest capital project SCT is involved in to date, at a cost of £1.6million with significant Scottish Government support. It was first time SCT has purchased land and also the first time a housing development has been built on a common grazings in Staffin. It is a peaty, agriculturally poor piece of ground and SCT was keen to avoid the loss of better quality in-bye croft land in the district.

The Staffin community has suffered population decline in the last two decades, with a drastic shortage of accommodation for younger people and families and an over heated property market, which is out of reach for them. SCT is hopeful the new housing will help increase Bun Sgoil Stafainn’s pupil roll and ensure the community’s long-term sustainability.

The three-bedroom houses are now fully occupied by the new residents of the Taighean a’ Chaiseil development..

The site, close to the Kilmartin River was sold by the Stenscholl crofting township and Scottish Ministers to SCT in 2020.

SCT and its partners, the Communities Housing Trust (CHT) and Lochalsh and Skye Housing Association (LSHA), delivered the project, which was the winner of the Community Contribution Award art the Scottish Home Awards 2022.

Around 12 adults and eight children have moved into the new homes. Staffin’s population had reduced by 40 people (6.6 per cent) from 610 residents to 568 people in just four years, prior to SCT starting the project feasibility back in 2014.

NHS Highland became the long-term tenants of the new health centre on May 9.

SCT director Donald MacDonald said: “It is great to see this project moving towards completion after many years of hard work by the trust. Unfortunately, this project does not address the underlying issues, faced by many young people and families, in relation to spiralling property costs, lack of affordable housing and general investment in rural communities. We are grateful for the help we have received from public agencies and The Scottish Government but there is a need to find easier and more effective ways to help those most in need and allow communities to control to have a stronger say in the process.

New Taighean a’ Chaiseil resident Paul Young said: “We’re happy that the children are in safe walking distance to school. It’s nice that these houses have been built together in Staffin, it's in the perfect location for families, giving the children more independence with being able to walk to school and play with their friends. The houses are very cosy and enjoy an amazing view. We are looking forward to making our house our home.”

Another new resident Karen Hutchison added: “I love the wee community feeling between all the residents. It’s so lovely seeing all the kids popping into each other’s’ houses, outside playing and walking to school together."

SCT and its partners have worked on developing this project since 2014.

The Highland Council and Highlands and Islands Enterprise (HIE) had funded a housing needs report, which identified a clear demand locally for new homes.

The project has involved dozens of meetings, a considerable amount of research including valuable visits to other West Highland communities, funding applications, lobbying and consultation events. You can see the community and political support from a short film made for our Crowdfunding campaign, see below. This video was produced by Hugh Campbell Marketing and helped SCT raise more than £7,000 for the project. See our crowdfunder film here

The main funders are : 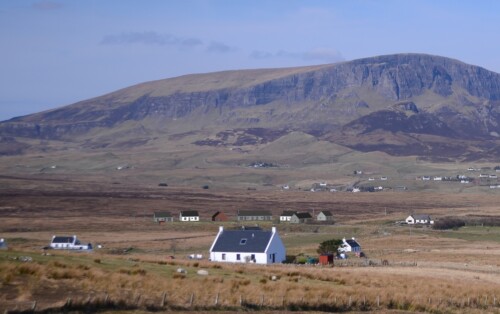